1. A Place to Bury Strangers - I Know I'll See You
I'm amazed, and happy to hear, that there are so many bands keeping this sound alive. It's Jesus and Mary Chain mixed with early My Bloody Valentine, sprinkled with a little bit of The Cure and Joy Division/early New Order. This band is getting a lot of attention lately and it's deserved. It's reminds me of the time when I saw the Pixies open up for the Jesus and Mary Chain back in October of '88. Boy am I getting old. Buy this album.

2. Ash - Ritual
I didn't like the last couple of albums because there was one good song and a bunch of filler. This album is actually very good. I wasn't expecting much when I listened to it, but it really surprised me. Ash is back! Pick this album up.

3. Astrobrite - Kisspeach
I hope the rumors are true about a new My Bloody Valentine album sometime in the next couple of years. In the meantime, I have to settle with the new crop of shoegazer bands that take their sound and add nothing to it. I like this song for it's soothing effect. Kevin Shields should market one of those "Soothing Sounds of Nature" cds and produce a "Soothing Sounds of Shoegaze." Buy this album if you want to hear more of the same. It's pretty good but I'd rather listen to MBV.

4. Bella - Camelot
A fun little song. There are a couple of good songs on this album.

5. Björk - Vertabrae By Vertabrae
The brass really compliments her voice.

6. Black Lips - Bad Kids
The only good song on the album.

7. Cherry Ghost - Alfred The Great
It's not a bad song.

8. Flash Hawk Parlor Ensemble - Amnesiac / Morning Bell
In 2005 Chris Funk and his family moved into their new home in the historic Mississippi neighborhood in Portland, OR. He would play various instruments on his porch during hot summer night which caught the attention of his neighbors. He soon found out there was in fact an unusual amount of musical activity on his block and that he was surrounded by closet folksmen and recovering band geeks. He soon invited his neighbors in for weekly living room hootnannys. This recording documents those times in an array of cover songs and origional “jams” written in a haze fueled by fellowship, libations and other unmentionables.

9. Fourth of July - Purple Heart
This is not my favorite songs of the month but it'll do.

11. Kevin Drew - Aging Faces Losing Places
It's just another Broken Social Scene album to me. I guess Kevin want more attention since everyone talks about Fiest and Emily Haines. Who is the female vocal?

12. Laura Gibson - Come By Storm
Laura weaves her voice delicately through the arpeggios of the guitar beautifully. This is off a compilation cd and it's too bad that this song was left off her album.

13. Rilo Kiley - Breakin' Up
I'm still deciding if I like this album. This is the best song on the album.

14. Taken By Trees - Open Field
I don't enjoy instrumentals but this is so sweet.

15. Tegan and Sara - The Con
I only like 2 songs off this album, I was hoping for more. Skip this album.

16. The Apples In Stereo - Sunday Sounds
I was wrong about this album. There is enough good songs for me to recommend it. Buy it!

17. The Fiery Furnaces - Uncle Charlie
There are only a handful of songs I like from this group (meaning 3). I keep giving them chances to impress me and they fail every time. I do like this song, however, from their new album. It would be better if the vocal was taken out in one section. Skip this album.

18. The Jena Campaign - Wyoming
Shame on you if you haven't bought this album.

19. The Polyphonic Spree - Section 22 [Running Away]
It reminds me of Blondie when the vocal starts. The song is ok.

20. The Stereotypes - Butterflies
The only good song from this album. Don't bother.
Email ThisBlogThis!Share to TwitterShare to FacebookShare to Pinterest
Newer Posts Older Posts Home
Subscribe to: Posts (Atom) 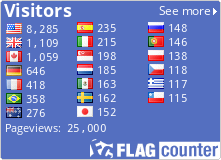